Great Grandma and Others Off the Boat from Ireland

Great Grandma and Others Off the Boat from Ireland

Mamo is the Irish word for Grandma, but I think my father called his, grandma, here in the states. My father didn’t say much about his grandma when I was a kid, but she had been gone for decades.  He did like to say that he used to run one errand for her in Chicago, running down to the tavern for a bucket of beer. Can you imagine a young child running into a tavern today on such an errand. My grandmother looked pretty fit in this picture by the standards of the day. Certainly, she was not going to waste away. She was born in Ireland. My grandmother was born there as well.
My grandmother had many of the same Irish habits that do doubt her mother had and certainly those were passed down to my dad. My sisters got a better education than myself by actually visiting Ireland and having a chance to spend time in my cousin’s cottage in Donegal. My cousin passed away and the cottage was sold. Her side of the family was half Scot and her dad’s family had a long association with Donegal that dates back to the Planters. But there was a conversion at some point and his family was Catholic. In fact, his service to the Catholic Church was so remarkable, that he was named a Papal Knight–perhaps one of the highest honors for Catholics. His son is a Dominican priest.
My side was not so distinguished. We had people in the unions, police officers, teachers and so forth–certainly quite noble, but not what people would call distinguished. My mother’s parents were born in Ireland as well–Donegal (father) and Dublin (mother). But they moved to Clyde Bank Scotland for jobs early on. My mother’s parents died when she was a child and she was brought over to the US and raised her by her brother.
Being Irish American is certainly different than being Irish, although there are similarities no doubt. The Irish American people like to stay close to their heritage, although as children become more diverse, it can be a challenge. Having about  100% Irish lineage like me is certainly different than having 25%.  I was in a religious education class about 10 years ago and it was interesting to find kids who would raise their hand to say that they were part this and that when you talked about St. Patrick, St. Joseph, and other saints.  They were Irish, Italian, Polish, etc., all rolled into one. There was a kind of inclusiveness at work, but I have to be honest, it also came with a weakened sense of identity. I think the more we have diversity in our backgrounds, the more American our identity. And some say that’s exactly right and that’s the way it should be here. 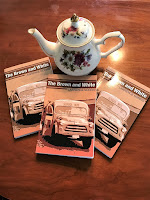 I have tried to identify the Irishness of my upbringing and the effort has been imperfect to say the least. However, I did give it a serious shot in a couple books that I have written, one being The Brown and  White, a fictionalized memoir  of my freshman year in high school coming from my little Irish neighborhood and passing into the harsh realities of the late 1960s. Like all of our books at Sporting Chance Press, The Brown and White promotes the good. It’s also funny.

I think in many ways life can be about passing from safety to insecurity and back again. When I look at my dad’s grandma above, I think of her having a firm hand when needed and offering every ounce of her strength for the family.  She doesn’t look like someone you’d take lightly. I remember my dad saying that his mother was keen on having you keep your ears clean.  My dad’s shoes were shined and his nails were always clipped, but mostly he was clean of heart.
sportingchancepress.com
By Larry Norris|2021-03-17T14:45:23-05:00March 17th, 2021|Irish American Stories|0 Comments